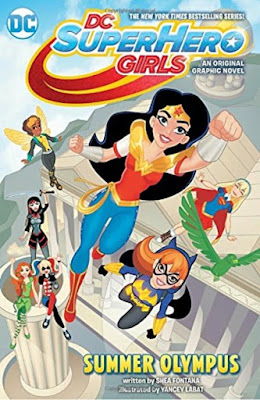 This original graphic novel aimed at young girls is a lot of fun. It is chock full of pretty much every mainstream superhero DC has plus Wonder Woman meets her extended family on Zeus' side so we also get to meet a ton of Greek mythological heroes as well. This is a graphic novel which hasn't appeared in comic book form so is an original story and the third, with a fourth coming out later this year, book in a series. I haven't read the first two but this story is a standalone making it unnecessary. I enjoyed quite a bit though so will back read the first two books. It's an easy read and probably most suitable for the 11 and under crowd. The story is full of action and brings learning moments to the foreground especially about being happy with who you are and not being defined by who your family is.