Batman Beyond (Rebirth) Volume 1: Escaping the Grave by Dan Jurgens 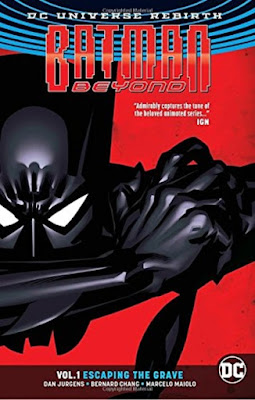 Batman Beyond (Rebirth) Volume 1: Escaping the Grave by Dan Jurgens
My rating: 5 of 5 stars

OMG! This is absolutely Bat-Fantastic! So many twists and turns, the ending is unbelievable! I thought "New Superman Vol 1" was the best Rebirth trade I'd read but this has surpassed that for me. I went into this blind. I've never watched the cartoon "Beyond Batman" which this is based on, nor did I know anything about its plot or content. I was not happy when I first saw we were going to get "another" new Batman, but they've brought this off while, as far as I can tell, keeping to canon. Cleverly the book is set "several decades from now", which could be up to 70/80 years in the future from today or from the time anyone reads the book in the future, keeping the series well grounded in the "future". Terry McGinnis had me from when he opened his mouth, one of the best Batmans ever! Lots of new characters, some bringing in the past (Commissioner Barbara?!), and humour. Dark, gritty story with snide, actually funny humour. I'm in on this one for the ride!