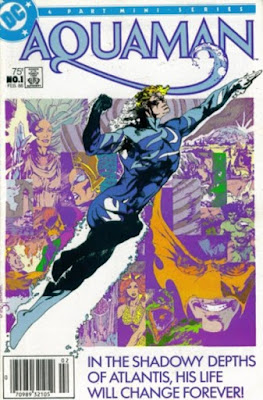 Aquaman #1 In the Shadowy Depths of Atlantis by Neal Pozner
My rating: 4 of 5 stars

An exciting first issue of a 4-part mini-series! Both Atlantis and Aquaman are in trouble. First, Orm sets off an explosion in the city where Arthur and Mera are currently living. Then he almost takes Aquaman out with his mysterious new strength. Just before Arthur can deal with this calamity he is called to Atlantis for an emergency. There he finds that his previous new conditions of uniting the various isolated nations of Atlantis and bringing new ties with the surface world have blown up into discord and Aquaman is to blame. His life is not safe in his Homeland. There's much more to the plot which keeps it action-packed and a deep story. Very well written and I liked the art except this artist draws faces kind of weird. Midway Aquaman gets a new suit to camouflage himself so he won't be recognised by everyone who wants his head; I really like this various shades of blue costume. I don't have issue two so hopefully, I can get into issue 3, then 4 without too much problem. 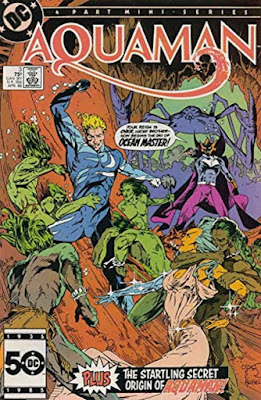 Aquaman #3 Orm's Scheme by Neil Pozner
My rating: 3 of 5 stars

Having missed issued 2 I don't seem to have missed much except the "how" of where everything is now ... on the verge of war. We start with the Atlanteans on their way to war with the surface then switch to Aquaman and Nuada who are attacked and captured by Ocean Master. The entire book is battle scenes with Orm and a flashback as Arthur tells Nuada the story of the two brothers' background, childhood and why Orm hates Arthur so much. A fun read. 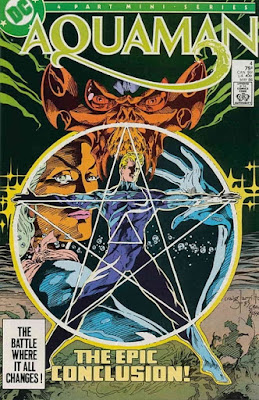 Aquaman #4 Thicker Than Water by Neil Pozner
My rating: 3 of 5 stars

Somewhat disappointing for the "Epic Conclusion" issue. It's a battle to the end. Arthur and Nuada have been captured by Ocean Master and are trapped unless Aquaman can figure out Orm's weakest link. Then the story goes all touchy-feely with Arthur having to own his personal anger, get over it and replace it with love. A bit of eye-rolling on my part occurred here. However, the art is consistent with the rest of the series and I liked the ending which concluded this arc but leaves it wide open for a continuation. An interesting tidbit about this volume is the advertising for the "upcoming" Frank Millar's Dark Knight. There is a cool ad and a full page editorial about what to expect.