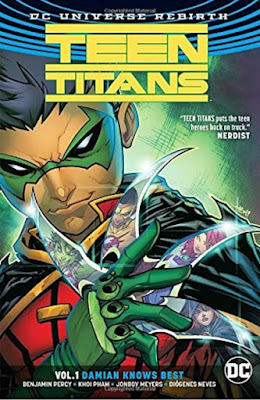 First, just let me get this out of the way, I do not like the art at all. Everybody looks weird and it just did not appeal to me. OK, now the story. I really enjoyed it. The Teen Titans are basically disbanded. I haven't read the book previous to this where they loose their Red Robin, Tim Drake, so I just kind of gathered intel as I went along. However, Damian is under threat from his past and decides he is going to get the team back together with him, obviously as the Robin. Beast, Starfire, Raven and Kid Flash don't know Damian and what they do know is that he isn't "good" or to be trusted so they get off to a rocky start. The book's villain is Ras al Ghul and features Robin overcoming his heritage. Meanwhile, the other Titans divulge their less than stellar roots and we see this group does have a commonality after all. Good story, I haven't seen Ras show up in my reading lately so that was fun as well as a couple-page pop-in by Batman at one point.