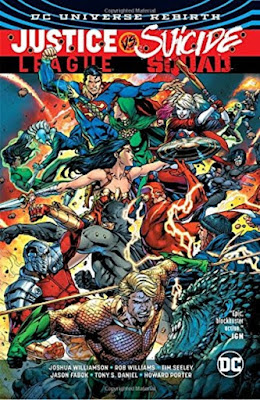 Justice League vs. Suicide Squad (Rebirth) by Joshua Williamson
My rating: 4 of 5 stars

Given the title, this is very much more a Suicide Squad book with a bit of impact from the League. I love both teams and was highly looking forward to it, plus it contains a lot of material: 6 issues of the title series and two from each of their respective series plus a few pages extra from one. There is lots of story and tons of action but I was a bit disappointed in the lack of depth in the JL part, however, the extra parts more than made up for it. The book starts with a 'Prologue' which is actually the 'Epilogue' of the last Suicide Squad volume. Then JL finds out about SS and the shite hits the fan. Eventually, another team comes to the surface, I won't give away who they are but Waller knows them. Justice League along with many civilians get infected with an aggressive virus causing a Suicide Squad vs Justice League scenario which eventually turns into a JL+SS vs the new team showdown. Lots of information and insight into both the SS and new team's characters. But minimal input on JL members, in fact, there is no reference to which Flash is present and Superman feels to be written as the old one, though nothing specific is said to show whether he is old or new Clark. A very intriguing ending though, which could lead to a new series even!