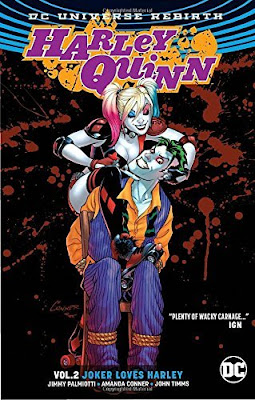 This takes Harley in such a completely different direction than the other current DC Rebirth titles that it doesn't even feel as if it belongs. This was just pure silliness! After a specific episode in Suicide Squad Vol. 2 where Harley's insanity is measured against her own sanity, this flighty, ditzy Harley is pure nonsense. Two one-off stories start the trade, the first being gaggingly environmentally pc with Poison Ivy. Both these stories plant a seed about the upcoming Joker arc. The next 3-issues tell the story of the title arc which is easy to figure out and almost boring watching Harley behave in this sane but silly caricature. And finally, it is all topped off with a purely idiotic Christmas issue having Harley save Santa. I'm going to have to get my Harley fix from Suicide Squad as this just doesn't cut it for me.