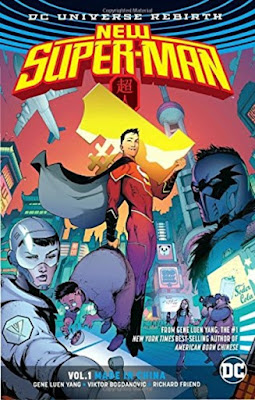 New Super-Man (Rebirth) Volume 1: Made in China by Gene Luen Yang
My rating: 5 of 5 stars

Totally awesome! A whole new super-character with a whole new origin story. Gene Luen Yang is one of my favourite graphic novelists and though his run on the original Superman disappointed me, this new Super-Man of China totally rocks. A fantastic backstory with government and dissident organizations working behind the scenes and members of three new teams whose classification as superheroes or villains is blurry until the end. A spectacular job of introducing an army of new characters but especially Super-Man, Bat-Man and Wonder Woman of China. Great plot with lots of action and a shock ending make for an engrossing read. Both DC fans and Yang fans alike will want to get in on this new series.