Be a Star, Wonder Woman! by Michael Dahl 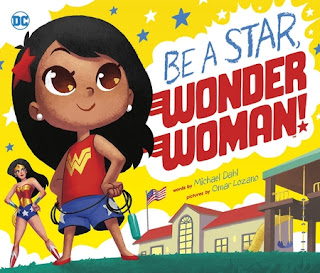 Be a Star, Wonder Woman! by Michael Dahl
My rating: 3/5

Michael Dahl comes to us with his third entry in superhero picture books. First, we had bedtime with Batman, then getting ready in the morning with Superman, and now we have going to school with Wonder Woman. This new book is not up to par with the first two. First, the rhythm and tone of "Good Night Moon" has been abandoned; not a good idea as that in itself is always a winning combination. So this just reads like a regular simple picture book. Like the others, it compares the child's school day to Wonder Woman's superhero day. But rather than comparing them as being similar, "Be a Star" is heavily didactic telling the child how to behave in a hero or star manner. The art, however, is very compelling as in the other books and the highlight of this one. Wonder Woman is drawn in a tall, slim, angular fashion which compliments the short, childish, roundness of the little girl. Good for Wonder Woman fans but not for those looking for a continuation of the first two books' quality.