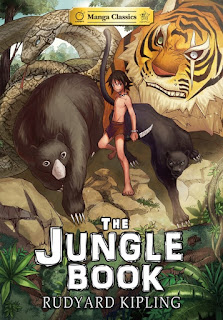 Manga Classics: The Jungle Book by Crystal S. Chan
My rating: 4 of 5 stars

I was so thrilled when I saw a new Manga Classics was out! I love this series and have read them all. Jungle Book excited me as 1) I've read the original and 2) these are short stories, something the series has not done before. The art is just as magnificent as on previous volumes and the author notes on adapting the original at the back are as illuminating as ever. This series stay as close to the originals as possible only adding artistic license where necessary to adapting a printed word novel to an illustrated manga format. The Jungle Book succeeds and presents a well-told version of the original seven stories: 4 featuring Mowgli and three others. The Mowgli stories aren't exactly chronological but they flow nicely told together and of the three stand-alone stories Rikki-Tikki-Tavi is my favourite as it is in the original. Be warned though that this (and others in the series) are sourced from the original material, not anything like its Disney counterpart. I don't think the short story format works as well in manga as it does in text so this is not my favourite of all the books (Great Expectations and Scarlet Letter probably are) but this is well done, nevertheless, and will encourage readers to pick up Kipling's classic if they have not already.