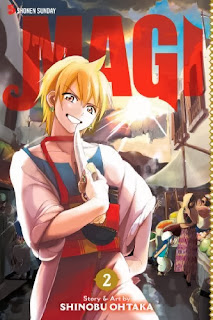 "Aladdin and Alibaba have entered the Dungeon of Qishan hoping to find hidden treasure—but danger's found them! A horde of slimes closes in on them, while Lord Jamil and his slaves head into the dungeon looking to intercept Aladdin and grab any riches he may have found! But these rivals have more to worry about than each other, and new friends, new enemies and amazing riches are yet to be discovered!"

I am so in love with this series.  Vol. 1 was action-packed and now Vol. 2 is character driven as Aladdin and Alibaba continue to search for the treasure in their first dungeon.  Their friendship blooms and these two are quick becoming fast friends of each other and mine.  A light story in that it is full of humour and good-natured, yet the story does take dark turns and the villains can certainly be quite nasty making it deserving of the 13+ rating.  The action is all at the end of this one making the djinn's, Ugo, appearance short but I enjoyed everything leading up to that point.  The author is using some cool mythology here.  The book is based on the Arabian Knights theme though it has a completely different story and in this volume we are told about a magi who must pick a king for the times which makes me suddenly think Merlin/King Arthur, THEN King Solomon's (Biblical) djinn turns up with his remaining power and we end the book plopped down in the Mongolian grasslands.  Thank goodness the next book is coming up right away! 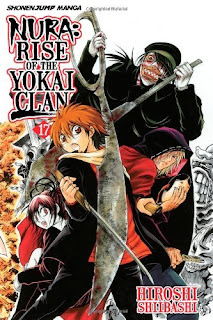 "Caught in The Ripper's scissors hold, Rikuo faces off against this terrifying enemy whose Fear feeds on the pain of children. Speaking of eating, brother and sister team Ryuji and Yura travel to the worst tourist destination ever, the Village That Devours People!!"

Absolutely freaking awesome.  One of the best volumes in a while.  This volume concentrates on a new Yokai Clan called the "Hundred Stories Clan" which consists of Yokai which are made up from myths and urban legends that become so widespread they have a life of their own and the Yokai are actually created from the fear itself.  Very awesome!  Rikuo and the Clan deal with some sweet stories and new yokai in chapters called: "The Ripper", "The Village That Devours People" and "The Girl on the Subway".  Finally the book ends connecting the Hundred Stories Clan with the past and we are set to take a peek at a bygone era and hear a tale involving Rikuo's father, Rihan.  Loved, loved, this volume and am so hyped for volume 18!
Labels: 2013 5* fantasy humour manga paranormal shounen T viz media YA