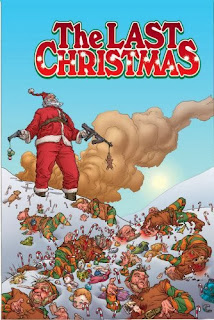 "The writers behind the hit series Deadpool present the sad, funny, and true story of Santa Claus after the apocalypse. After tragedy strikes the North Pole, Santa turns his back on humanity and gives up on Christmas. Even though the world has been completely overrun by naughty men, there's still one boy that believes in Santa. But could that be the biggest mistake of his life? Enjoy this modern action-comedy Christmas classic in hardcover for the first time. It's illustrated with love by comic star RICK REMENDER and inked in a wonderful style reminiscent of Mad magazine by HILARY BARTA. This edition has a foreword from PATTON OSWALT and new commentary from the creators, plus the original covers."

So, look at the cover and you get exactly what you would expect to get from this comic: violent, irreverent, over-the-top, vulgar, Christmas farce.  I liked it, a lot actually!  Lots of f-bombs and swearing start off from the first page, so if you get offended easily don't even bother.  After only a few pages I had settled into the groove and was thinking Fables with Santa & Frosty as as the main characters.  Santa goes ballistic after Mrs. Clause is murdered, cancels Christmas and turns into a drunk.  Several years go by, and after numerous suicide attempts to join his beloved he sets out to get the one remaining kid who still believes in Santa Clause who is making it impossible for him to die.  Adult humour ensues and Santa's opinions change giving him a taste of Christmas spirit once again.  Oh, did I forget to mention the zombies....  nothing spectacular, but lots of fun.
Labels: 2013 3.5* apocalypse christmas fantasy graphic novel humour image comics