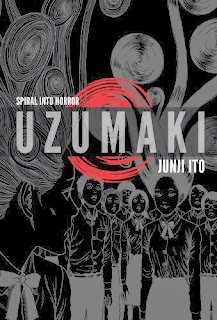 "Kurouzu-cho, a small fogbound town on the coast of Japan, is cursed. According to Shuichi Saito, the withdrawn boyfriend of teenager Kirie Goshima, their town is haunted not by a person or being but by a pattern: uzumaki, the spiral, the hypnotic secret shape of the world. It manifests itself in everything from seashells and whirlpools in water to the spiral marks on people's bodies, the insane obsessions of Shuichi's father and the voice from the cochlea in our inner ear. As the madness spreads, the inhabitants of Kurôzu-cho are pulled ever deeper into a whirlpool from which there is no return!"

Originally published in 3 volumes this 2010 Japanese horror manga is a twisted ride to read.  I love the horror genre but have not sampled much of it in manga yet.  If the field can be judged by this book alone, there must be some awesome stuff out there.  This is an incredibly disturbing story.  There is a bit of a plotting problem with the second volume as the boyfriend just seems to disappear until the end and the chapters become episodic rather than focusing on the goal of the plot.  However that all comes back together with the third volume and all answers are revealed to the extent that they can be when the evil is the "power of the spiral".  Characters are not developed enough to care about them and their reactions are totally not those of a normal person but perhaps the spiral has been working on them longer than we even realise. LOL These are the things that make me rate the book 4 stars, however, on pure adrenaline and horror shock value I had an incredible read.  With each incident becoming more and more freakish and fantastic.  This is not a blood and guts horror.  There is a bit of blood but it's not from slashing, rather from the disturbing situations that occur.  T+ seems a fair enough rating, some 13+ may be ok with it but the imagery is startling and unsettling.  The artwork is absolutely brilliant.  Overall, the art, imagery and ghoulishness of the story make up for any plotting problems and I fond this a deliciously disturbing Japanese horror story.
Labels: 2010 2013 4* horror manga viz media