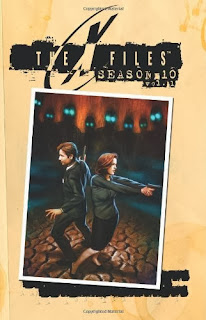 "For years they investigated the paranormal, pursued the "monsters of the week," and sought the truth behind extraterrestrial activity, along with the grand conspiracy surrounding it rooted deep within their own government. But when Agents Mulder and Scully reunite for a new, ongoing series that ushers The X-Files into a new era of technological paranoia, multinational concerns, and otherworldly threats, it'll take more than a desire "to believe" to make it out alive."

This is absolutely fantastic!  As a major X-Files fan (fantastic!) I adored this beginning of Season 10.  The tv show ran for 9 seasons ending in 2002 and chronologically this first volume of season 10 takes place 10 years later picking up with a plausible storyline.  I'm not going to give any details but everything comes together to continue the main plot of the series with the aliens and conspiracy themes.  Great joy also as so many familiar faces return to the pages and people who were supposedly "dead" are back in action.  I can't hold my tongue on one as it is so exciting.  SPOlLER ALERT.  We are presented with return of duh duh duh .... The Lone Gunmen. Yipee.  Love, love, loved this book. 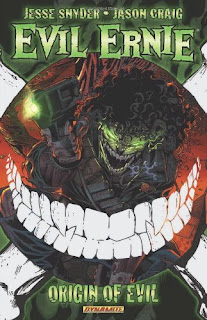 "Ernest Fairchild was a kind, gentle soul... until one day something snapped, leading him to launch the most notorious killing spree in American history! What led an ordinary boy to become a leather-clad angel of death? How does he wield such blasphemous power? And what is the sinister secret behind the foul-mouthed, smiley-face button that incites him to kill? The founding fiend of Chaos Comics is back, reinvented for a new generation! Collects Dynamite Entertainment's complete six-issue comic book storyline!"

I hadn't heard of Evil Ernie before so can't compare to the original character but was giddily looking forward to this as Dynamite has become one of my favourite publishers and Snider is the author of my absolute treasured Toy Story graphic novels.  This did not disappoint me.  It is a fun, violent romp of murder and demon possession.  Evil Ernie is a bad guy, really bad, who is kind of trying to do the right thing, as he sees it anyway and we don't feel all that bad for him, at times, as there is a character worse than him, the one he's trying to kill.  But then Ernie is a mass murder, who has sold his soul to the devil, is swayed by the demon possessed smiley face button he wears and Ernie is way beyond redemption, so feeling sorry for him doesn't last too long.  This is a good, entertaining horror story and Craig brings it to life with his awesome, gory artwork
Labels: 2013 4* 5* based on tv dynamite entertainment horror IDW paranormal science fiction