370. The Joker: Death of the Family by Scott Snyder 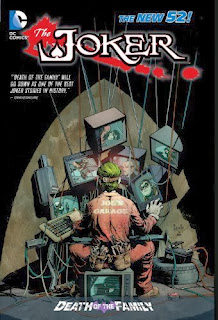 The Joker: Death of the Family by Scott Snyder & others. Art by Greg Capullo & others

Batman: Death of the Family

Purchased a new copy from an online retailer

Brilliant, brilliant storyline!  The new Joker is dark, wicked, vicious and the stuff nightmares are made of.  Collected here are all the issues from the various series that contributed to the "Death of the Family" story arc.  I've read most of those series separately so not much in this book was new to me, but having the complete story together in one place made for fantastic reading.  This is a big book and I lingered over it taking a few days to read it delighting over seeing the story put together cohesively like this.  I have never liked the Joker as a villain having read/watched him portrayed in the classic campy style too often; however, this New 52! Joker, with his attached face, is absolutely frightening and I adore him!  This is a must read for any Batman fans whether you are following any of these series or not.  It stands alone as a nice read, though it does have ambiguous endings.  If you own all/most of the series included here either in comic or trade format you may not wish to own this book due to the fact that you will be duplicating material you already have but in all honesty, I own several of these in trades and I think this is a wonderful collection devoted specifically to the Joker story line.  I know I'll be pulling this one off the shelf to re-read more often than I will each of the specific trade volumes.  Depends on whether you are in a Joker mood or a Batman/Nightwing/Batgirl/etc. mood!
Labels: 2013 5* Batman DC Comics graphic novel superheroes