404. My Friend Dahmer by Derf Backderf 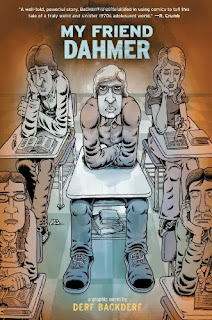 404. My Friend Dahmer by Derf  Backderf

"You only think you know this story. In 1991, Jeffrey Dahmer—the most notorious serial killer since Jack the Ripper—seared himself into the American consciousness. To the public, Dahmer was a monster who committed unthinkable atrocities. To Derf Backderf, "Jeff" was a much more complex figure: a high school friend with whom he had shared classrooms, hallways, and car rides. In My Friend Dahmer, a haunting and original graphic novel, writer-artist Backderf creates a surprisingly sympathetic portrait of a disturbed young man struggling against the morbid urges emanating from the deep recesses of his psyche—a shy kid, a teenage alcoholic, and a goofball who never quite fit in with his classmates. With profound insight, what emerges is a Jeffrey Dahmer that few ever really knew, and one readers will never forget."

If you read my reviews regularly you'll know I read a lot of serial killer books, both fiction and true crime.  I have never read about Jeffrey Dahmer before though.  On purpose.  When that case went public I was just so horrified with the whole thing I could not watch any of the interviews nor was I barely able to even look at him when they showed him on the news.  Since then I've had no desire to read anything about him.  When I heard about this graphic novel last year I was tempted because of the unique perspective.  What was it like growing up as Dahmer's friend in jr/sr highschool then finding out he was a monster?  But I couldn't bring myself to lift a somewhat self-imposed ban on the topic.  Then one of my favourite blogging buddies, Joy, reviewed and recommended it.  I knew if she liked it I'd be able to handle it.  It is superb!

Derf tells how he knew Dahmer in grade school, jr & sr high.  They lived in the same small town but it wasn't until highschool that they started to hang out.  Derf's group of friends were outsiders themselves geek band kids, not with the cool kids, and somehow they adopted Dahmer into their group, as a sort of mascot.  Dahmer acted out in class putting on a "spaztic" routine that became the centre focus of Derf's Dahmer group.  It was teen-age boy goofing around stuff, probably hurt a lot of feelings, but these kinds of kids didn't really care.  Derf tries to make sense of that time looking back at it now as an adult who knows what Dahlmer became.  Dalmer is portrayed as fifteen-year-old Derf Backderf knew and saw him.  A regular kid, but one with probably more than his fair share of problems, parents who didn't seem to care, that were wrapped up in the anger of their ending marriage.  A guy with rumours circulating about him and dead animals, a freakishly large and muscular kid, one who acted like an epileptic having seizures, while mentally challenged and lisping at the same time.  Dahmer's act.  This was just his thing.  Derf has sympathy for this kid he knew and went to school with.  And he asks "where were the adults in all this? Did no one notice Dahmer needed some help?"  Derf and his friends gradually pulled away from Dahmer because each in his own time became aware that Dahmer was scary ... dangerous scary.  At this point as a reader we can sit and look back with Derf at the situation.  Derf has sympathy for him; he knew the kid; maybe many of us can sympathise up to this point too.  The rest of Dahmer's story did not have to happen if someone had cared or noticed or bothered to take positive action for the disturbed kid, Jeffrey Dahlmer.  But no one did.

And so, both Derf and the reader accept reality.  As an adult Dahmer is responsible for his own actions.  He killed, tortured, mutilated and did despicable things.  Here is where Derf makes it clear that this monster is no longer anyone he, the author, sympathizes with.  With Dahmer's first kill he chose to continue doing so and the past cannot be blamed for his actions anymore.  The author muses that Dahmer could have done many things to prevent further killings, turning himself in to the police or mental health facilities, killing himself, etc. There is a lot of thinking here for the reader to grasp how a child, someones highschool buddy end's up a monster of a serial killer.

I love Backderf's artwork.  Dahmer always looks so uncomfortable in his own skin, whether he is sad, mad, embarrassed or just being plain creepy.  I'm glad the book is done in b/w as I find these true crime novels work best in the graphic format without any colour.  I am so pleased to have read this and I think I will read a book on Dahmer's case in the future now.
Labels: 2012 5* Abrams ComicArts biography mental illness nonfiction true crime