410. The Black Beetle Volume 1: No Way Out by Francesco Francavilla 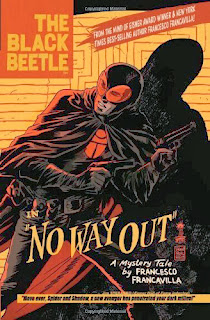 The Black Beetle Volume 1: No Way Out by Francesco Francavilla. Introduction by Darwyn Cooke

"After witnessing an explosion that decimates the city’s organized crime community, killing dozens, the Black Beetle—Colt City’s sleuthing sentinel—is on the hunt for answers and justice!

I'm really getting into these "masked" hero tales and this one interested me from Dark Horse, a publisher I always seem to be pleased with.  This time we are in the time period of the Nazi's but pre-WWII so sometime in the 1930s.  The art is absolutely gorgeous.  Using techniques of the old 30s/40s movie posters & lobby cards (in fact these have even been added as extras!) the book has a real old-timey pulp look to it and is a visual feast for the eyes.  I wasn't, however, as taken with the story.  The book opens with a one-shot which I enjoyed quite well.  Then the rest of the book brings about the "No Way Out" story-line which is a story complete within itself, however, elements from the one-shot are brought into play tying them together and popping up again at the end to tie in with the next volume.  This leads me to seeing how the Black Beetle could have separate cases in each volume that are solved with the one main storyline running throughout the series.  Anyway, the story was too "talky" for me, too much talking about the evil plot; BB is by himself most of the time so we get lots of narrative of him talking to himself and at the end we get the old egotistical villain taking several pages to explain exactly why and how he did everything he did.  Plus Labyrinto, a guy in a bodysuit with a maze pattern on it is pretty lame.  The Black Beetle's costume is cool though, but I don't think I'll bother reading another volume unless I came across it at the library perhaps.
Labels: 2013 3* crime dark horse historical fiction masked heroes superheroes