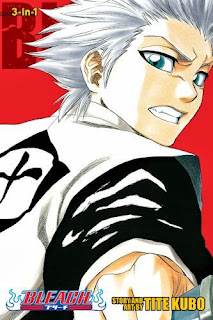 "With Rukia’s execution looming, Ichigo and the rest of the rescue squad must find a way to break her out of the Senzaikyû prison. Not only has her sentence been moved up, but the imprisonment is close to breaking her usually indomitable spirit. And to make matters worse, political intrigue is brewing in the Seireitei, and Ichigo and his friends are caught in the middle of it!"

Received a Review Copy from the publisher.

Vol. 16: Night of Wijnruit - Best part of this volume is that in a flashback story we learn the truth about what happened to Chad's brother, who killed him and Rukia's part in it!  Loved it.  Otherwise the gang is *still* trying to save Rukia, her execution is imminent now and Ichigo continues to train while battles with the Soul Reapers continue with Gin causing trouble and ending with another major battle against Kenny.  An action-packed volume.  (3/5)

Vol. 17: Rosa Rubicundior, Lilio Candidior - Another pure action volume.  There is a power struggle going on between the various Soul Reaper captains, some wanting to help save Rukia.  So the volume is pretty much filled with battles of good captains vs evil ones with Gin slinking around spreading his evilness.  The captains and Rukia are the main characters and we see little of any of our other main characters save Ichigo.  Not a particularly exciting volume for me but it moves the plot finally up to the hour of Rukia's execution.  How, and will, she finally be saved in the next book?  (3/5)

Vol. 18: The Deathberry Returns - Great mid-battle ending between two surprising combatants!  This volume feels like it is at the apex of the climax of the "save Rukia" plot we've been on for several volumes now.  Loyalties have divided and the "bad" side consists of the really nasty guys now.  Still unsure if anybody's going to actually be friends after all this is over but we'll have to see.  An old character who only appeared in one volume a long time ago has come back and I think she may be part of the final conclusion, which seems to be coming in the next 3-in-1 volume.  Good ending to this book. (4/5)
Labels: 2013 3.5* manga paranormal shounen T viz media YA