392. Rocket Robinson and the Pharaoh's Fortune by Sean O'Neill 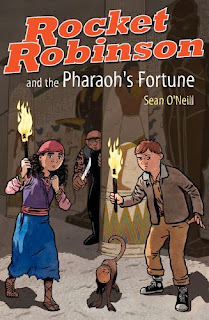 Rocket Robinson and the Pharaoh's Fortune by Sean O'Neill

"Cairo, 1933. The Egyptian capital is a buzzing hive of treasure-hunters, thrill-seekers, and adventurers, but to 12-year-old Ronald “Rocket” Robinson, it’s just another sticker on his well-worn suitcase. All that changes when Rocket and his pet monkey, Screech, find a strange note written in Egyptian hieroglyphs which launches Rocket into an adventure more incredible than anything he’s ever seen at the Saturday matinee.

Guided through the secret subterranean world of Cairo by his new friend, a gypsy girl named Nuri, Rocket soon runs afoul of master criminal Otto Von Stürm, who, with his thugs Khalil and Khan, is planning the theft of the greatest treasure in history—an ancient Pharaoh’s fortune, secretly hidden for centuries. But will Rocket and Nuri be able to stop them in time?"

If the cover hasn't brought it to mind yet, by the time you are on the first page you will be thinking "Tintin".  A fair enough comparison as the art style has a flourish of that French-style that makes Tintin so recognizable and then the story is full of adventure, globe-trotting, a German bad guy, ancient relics and archaeology.  But O'Neill brings his own creativity to the table creating a unique character in Rocket Robinson and his partner Nuri, a gypsy girl.  Even though set in 1930's Egypt, hence the acceptability of German bad guy Otto von Sturm, O'Neill brings a fresh, more modern tale than a Tintin would allow for.  Nuri is an equal partner in the adventure and since she's the native of the area, takes the role of leader more often than Rocket.  Adventure, escapades and derring-do abound.  Rocket is in real life danger, including being kidnapped and no-one will believe him, so it is up to him, Nuri and Rocket's pet monkey to dash the villain's dastardly deeds.  My only complaint is that there are several episodes where educational/historical information tries too hard to be inserted that it felt like the character was either being a wise guy or flipping into teacher mode.  Don't try so hard next time Mr. O'Neill; and a next time there will be as the book blatantly let's us know we can expect a further adventure of Rocket Robinson.  Looking forward to it!
Labels: 2013 4* adventure boilerroom studios graphic novel historical fiction mystery