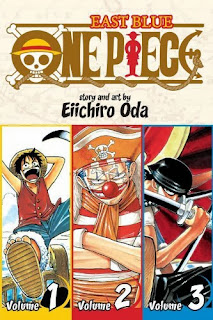 "As a child, Monkey D. Luffy dreamed of becoming King of the Pirates. But his life changed when he accidentally ate the Gum-Gum Fruit, an enchanted Devil Fruit that gave him the ability to stretch like rubber. Its only drawback? He'll never be able to swim again--a serious handicap for an aspiring sea dog! Years later, Luffy sets off on his quest to find the "One Piece," said to be the greatest treasure in the world..."

Some may consider this review to contain spoilers.

Vol. 1: Romance Dawn - I've had this recommended to me a few times and since it has been going since like almost forever; they're up to vol. 68 at the time of this writing, I thought I'd better get in the know and find out what the big deal is.  This first volume didn't impress me too much.  It was funny, but not laugh out loud.  It is certainly weird, very different from any other manga I've read to date.  I'm not sure if I'm going to be into something so heavily relying upon humour.  On the other hand, I thought Captain "Axe-Hand" Morgan was a cool bad guy and could look forward to more like that.  While none of the characters impressed me in this volume, and I do have to remember we are looking at a volume 1 that has a long way to go in development, I can see some potential in them and at the moment am interested in Roronoa Zolo.  He could be a cool character.  Luffy at the moment just seems gullible and naive.  Those are my thoughts after the first volume. (3/5)

Vol. 2: Buggy the Clown - I don't have much to say.  I'm not impressed at this point.  i don't like clowns; the bad guy is a clown an he's not even a scary clown.  Just a doofus.  A female thief has been added to Luffy's pirate crew as the navigator and as far as characters go, only Zolo is entertaining me at this point.  Next Volume will have to be a knockout to give me much interest in continuing with the series.  (2/5)

Vol. 3: Don't Get Fooled Again - The story picked up for me in this volume.  But first I suffered through the ending of the Buggy the Clown episode started in the last volume.  Next up the three new pirates set off once again and ended up for a brief lark on a deserted island that was being guarded by an ex-pirate who has been stuck in a treasure chest for 20 years.  I actually found this brief plot to be hilarious and liked Gaimon.  The rest of the book starts the set up of a new plot with their new friend, possible new crew member-to-be, Ussop, and the evil doings going on in his town as a pirate is in hiding there plotting an evil murder.  This new bad guy pirate seems like the average villain and while not earth shattering my interest is piqued enough that I'm going to continue with the series a bit more to see if it gets any better. (3/5)

My son read this volume and said it was just ok, but he asked me to make the decision on whether we should continue reading it or not.  So, I've said we'll try the next volumes from the library and see if either of us gets hooked enough for it to be worth our buying.
Labels: 2.5* 2009 adventure fantasy manga pirates T viz media YA