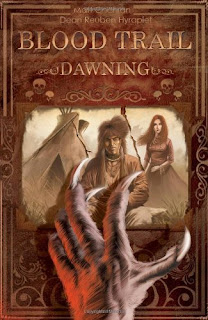 "Prisoner Etu, racked with guilt, re-lives the decision which led to the destruction of his tribe at the hands of an unthinkable monster generations before. The year is 1867 and nestled among the majestic mountains of the Pacific Northwest lies a Native American village on the verge of extinction. When its inhabitants become suspicious of a strange family who choose to live apart from the rest, young Etu trails the family to a camp deep in the woods only to discover that they possess inconceivable powers! When Etu reveals what he has witnessed to the tribe, his father, a powerful Witchdoctor, discloses the identity of the family and the spell he cast on them years before. An edict to exterminate the family at all costs is passed down - but when confronted by their powers, the plan only sets in motion the birth of a curse more evil than any of them could have imagined!"


This is a short book and because of that it doesn't live up to its potential.  I enjoyed the plot, though not entirely original, of an old family curse coming back to settle affairs.  The book actually ends on page 51 making it even shorter than it at first seems and this is explained on the next page by a note informing us of the untimely death of the artist, Hyrapiet.  The remaining pages are an artist galley of sketches.  The story ends rather abruptly with a "To Be Continued" which surprised me as the story read as if it was going to be a one-shot and I expected a finite ending.  I would have been much more pleased if the plot could have been finished in, say, a 120 pg book for a couple $ more than the way it has been presented here.  I did enjoy the Native American folklore, the Indian spiritual world and the violent horror tale which presents moral questions to ponder.  However, this ending is unsatisfactory and the book is simply too short.  The artwork however is gorgeous, and I can only presume the artist's death did have something to do with the book being published before it perhaps was first initially planned.