122. The Great Successor: A Political Cartoon by Ha Tae Keung 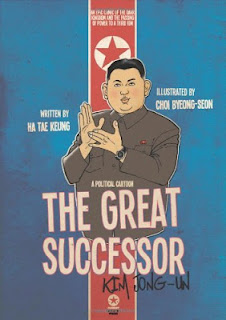 "THE GREAT SUCCESSOR, an epic comic of the Dark Kingdom, details the realities of the recent succession of Kim Jong-Un as leader of the DPRK. Written by Ha Tae Keung of Open Radio North Korea, it hopes to answer some lingering questions: Who is this third Kim? Where did he come from? And should we be afraid of him? From propaganda engines to “trusted” news sources, many of us will never know what really goes on in the North Korea. THE GREAT SUCCESSOR provides a rare glimpse at the new face (and belly) of leadership in the North.
Presented in a highly readable format, THE GREAT SUCCESSOR delves into what is in store for the future of North Korea. It provides some insight to the background of the young new leader of the most secretive dictatorship on earth. At only thirty, Kim Jong-Un could have a long future as a head of state. Will he tow the line of Military First to the bitter end (and invariable ruin of the state) or will he herald a new beginning of reform, and lead his people out of the darkness. Only time will tell.WHERE THERE IS TYRANNY THERE IS RESISTANCE!"


Received an egalley from from the publisher through NetGalley.


Absolutely eye opening!  The author is a member of "Open Radio North Korea" based in South Korea and with the probably upcoming succession of Kim Jong-Un as the leader/dictator of that country OPNK decided to write a comic book to explain how this was happening and the history of it to the mainstream citizenry.  Thus we have this comic.  Mostly written in the narrative, there are not a lot of speech bubbles and those that do occur are of South Koreans who are the ones talking to each other and then narrating this story.  The evils of communism is one of my particular interests and I am well read about China and Russia but honestly had never read about Korea, except in more ancient times.  All I knew going in was what most of us know about the nuclear threats coming from them these days.  Obviously a political book, but incredibly enlightening.  I came away from it shaking my head and believing Jong-Un is a power-mad, cruel despot.  North Korea is not only communist; it manages to also be a fascist monarchy all rolled into one.  It is shocking to see that the people of NK, living in a closed country, live as they did a 100 years ago, and are in fear of their lives if they try to revolt or speak against the government.  The dates mentioned in the book end in 2010, when neither Jong-Un had succeeded or his father Kim Jong-il had died.  So upon finishing the book, I absolutely had to get up-to-date with the present situation which found Jong-il dying in 2011 and Jong-un being named Supreme Leader that same year.  He is currently only 29 years old making his reign of tyranny even scarier knowing he hasn't reached an age of having lived a full mature life yet.  I am so glad I read this!!
Labels: 2012 5* biography Communism history Hungry Dictator Press nonfiction