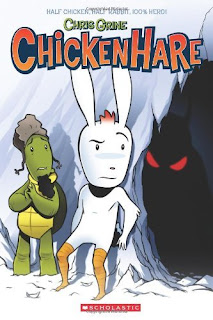 "Chickenhare: half chicken, half rabbit, 100% hero!

What's a chickenhare? A cross between a chicken and a rabbit, of course. And that makes Chickenhare the rarest animal around! So when he and his turtle friend Abe are captured and sold to the evil taxidermist Klaus, they've got to find a way to escape before Klaus turns them into stuffed animals. With the help of two other strange creatures, Banjo and Meg, they might even get away. But with Klaus and his thugs hot on their trail, the adventure is only just beginning for this unlikely quartet of friends."

As I was entering this book into my database I discovered that it had been published previously by Dark Horse.  No mention of this is made on the copyright page.  Fortunately sample pages of the original, still in print, are available online for viewing and after comparing them I can see that the new edition by Scholastic has first and foremost been colourized (the original is b/w) and secondly been edited to make it more suitable for children.  I get the feeling the original was written for an older audience.  Example of edits from the sample: "idiots" becomes "fools"; "You suck" becomes "You smell like cheese".  I liked this book; it is a dark, creepy story that deals with abuse though the subject matter may fly over the heads of the publisher's recommended age group 8-12.  A more mature mind readily sees the sometimes implied dark world and violence hiding very close to the surface.  There is a dead animal who comes back to life complete with broken legs and rib bones visible.  The animal ran away because he was abused but blames himself for his tormentor's now murderous evil ways ... if only he had stayed!?  All the bad guys meet their fate at the end in quite gruesome ways.  So, overall the story is quite deceiving from the cute cover and artwork found within.  Now, personally, I like dark, creepy stories and read this very quickly in one sitting finding it's black humour witty, seeing the message below the surface, and a fun read.  However, I'm not sure I would recommend it to Scholastic's audience.  I let my 13yo read it and he didn't get it.  His verdict was "weird" as he handed the book back to me.
Labels: 2006 2013 4* animal fantasy graphix humour MG scholastic