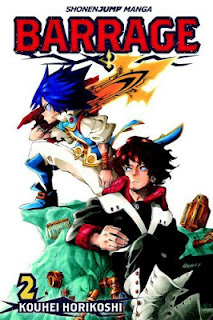 128. Astro of the Warring Planets by Kouhei Horikoshi
Barrage, Vol. 2

"Astro and his loyal knight Tiamat’s wild adventure of freeing Industria from alien invaders gets a lot more complicated in the city of Maseille. There they will have to defeat aliens who subjugate the city with a seemingly omnipotent power known as Dark Energy, and whose leader has a deep connection to Astro’s past."

Satisfying conclusion to this 2-volume manga series.  Lots of cool battle scenes but also goes into Astro's background fleshing out his character quite nicely for such a short story.  The overall theme is one of morals and ethics, having the potential to do either good or evil depending on your own choices.  I really enjoyed the characters, they were your usual over-the-top emotional manga but lots of fun.  I especially enjoyed the sole female Tiko, who though drawn rather scantily is a fierce personality.  Again nothing content-wise to make this rated T, except for the appearance of two mild curse words.  My about-to-turn 13yo loved this series and has claimed it for his shelves.  Fun short series, best to read both volumes back to back.
Labels: 2013 4* manga science fiction viz media YA