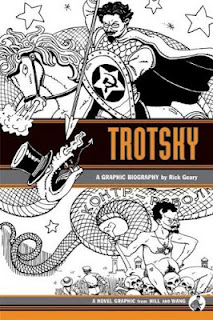 "Trotsky was a hero to some, a ruthless demon to others. To Stalin, he was such a threat that he warranted murder by pickax. This polarizing figure set up a world conflict that lasted through the twentieth century, and in Trotsky: A Graphic Biography, the renowned comic artist Rick Geary uses his distinct style to depict the stark reality of the man and his times. Trotsky’s life becomes a guide to the creation of the Soviet Union, the horrors of World War I, and the establishment of international communism as he, Lenin, and their fellow Bolsheviks rise from persecution and a life underground to the height of political power. Ranging from his boyhood in the Ukraine to his fallout with Stalin and his moonlight romance with Frida Kahlo, Trotsky is a stunning look at one of the twentieth century’s most important thinkers and the far-reaching political trends that he launched."


Rick Geary is probably my favourite graphic artist.  I just love his style of detailed b/w drawings and the use of lines to fill in space.  I'd read anything he illustrated but fortunately I have an interest in Communist Russia and the evils of communism in general.  First off, this is not a children's book by any means, not because of anything that may offend but because it is highly detailed in history, politics and warfare.  I knew nothing about Trotsky going into this book as my interests lie in the sociological affects of communism on the everyday people rather than the politics of the leaders, so I found it highly enlightening.  The leaders were just as ruthless and turned against each other as violently as they did on the people.  Geary does in my opinion come off a  bit too neutral; the reader will view the politics from their own worldview (left or right).  Guess which is mine? LOL  Anyway I found it highly enlightening and informative but decidedly heavy on politics and would only recommend to those who know something of Marxism, Leninism and Socialist Communism.  The art is divine!  There is a companion book to this one that I will read next on J. Edgar Hoover whom I have read quite a bit about already.
Labels: 2009 5* biography Communism graphic novel Hill and Wang