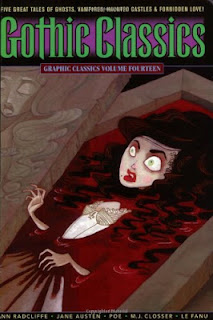 Plus a rare poem by Jane Austen"

I wish I could have given this 5* but the last story just didn't do it for me.  Out of 5 stories and one poem, the first 4 stories are classic Gothic tales by the great authors of the genre from their period in time.  Carmilla by J. Sheridan Le Fanu was fantastic; a vampire story which influenced Stoker.  I love this prolific Victorian short story writer and this was my favourite in the collection.  Then comes Ann Radcliffe's "The Mysteries of Udolpho", a classic of the genre and considered one of the first such novels.  I haven't read the novel yet so this was fun to read, though it is such a complicated and convoluted story that adaptation only makes it more so.  Edgar Allan Poe's short piece "The Oval Portrait" is well done, then follows Jane Austen's pastiche of the genre "Northanger Abbey" which readily makes references to "Udolpho".  I'm not a fan of Austen, but I've read some of her works including this and must say I enjoyed the graphic much more than the novel!  My only complaint is the last story by Myla Jo Closser, whom I'd never heard of, entitled "At the Gate".  I wouldn't by any definition call this Gothic.  A story of dogs in Heaven.  It is a bright, happy, cheerful story (those are not elements of Gothic) and with the wealth of Gothic short stories available I'm sure a more appropriate title could have been selected for inclusion instead.  Otherwise a fine volume with the usual pleasing art and a special call out to Lisa K. Weber's excellent work on "Carmilla".