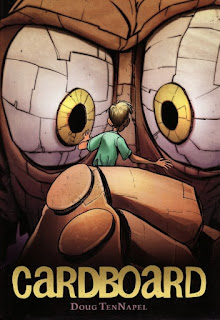 "When cardboard creatures come magically to life, a boy must save his town from disaster.

After Cam's down-and-out father gives him a cardboard box for his birthday, they fashion it into a man and it comes magically to life. But things spin wildly out of control when the neighborhood bully, Marcus, steals a scrap of the cardboard to create creatures that promptly disobey his orders and multiply into an unruly army.

Before long, Cam and Marcus must put their differences behind them and work together to prevent a legion of cardboard monsters from taking over the whole town!"

The cover of this book is absolutely compelling!  But I have to tell you those eyes made me think there was going to be an owl (I love owls) in the story, but, alas, no owl.  The whole book is a visual delight.  TenNapel's illustrations are fantastic, though somewhat creepy at times.  Each page was a joy to behold.  However, I have to admit that the story just didn't really do it for me; I have no major complaints.  It's just one of those stories that didn't sit right with me and I found it far-fetched, unbelievable, rather freaky for a kids' book and just not that fascinating.  It was good, ok.  I wouldn't go so far as to recommend it but if asked would say "sure, go ahead, read it".  The building upon a father/son relationship during hard economical times and the single parent family due to the death of the mother is explored both well and realistically. I enjoyed the author's "Ghostopolis" more than this which is darker and certainly a YA title;  I think "Cardboard" would have been more appealing (to me) if it hadn't held back and had made the jump to a YA title.  I wouldn't recommend for under tens though due to intense scenes.