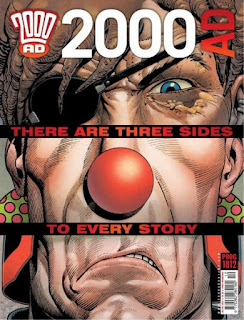 This issue includes: Trifecta: Special issue which concludes the three series: Judge Dredd, The Simping Detective and Low Life in one combined story where all three come together.  Very exciting, loved this whole run and it would make an awesome trade paperback! 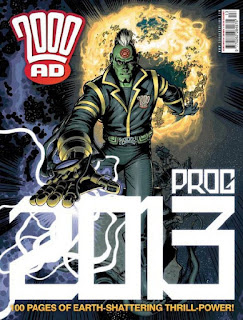 Judge Dredd: Violent Night - The annual Christmas story.  Dredd goes up to a section where the weather control has been cut off and a wild winter storm is getting worse.  He's after some dangerous looters, but has an accident and along the way learns, in a Joe Dredd kinda way, not to be so hard-nosed and have a little compassion from the spirit of Christmas.  4/5

Savage, Book 8: Rise Like Lions, Part 1 - This is my first time reading Savage.  Easy enough to understand.  It's 2010, an alternate reality where Britain has been invaded by aliens, I presume.  Savage is part of a resistance and this establishes the story which seems to have a connection with the ABC Warriors.  Here we are told the Hammerstein Mark Twos have just been built and the fight is back on.  Actually looking forward to meeting Hammerstein again in this context!  4/5


Ampney Crucis Investigates... The Entropy Tango, Part One - I've loved everything I've read by Ian Edginton so was excited to start this new series.  And it didn't disappoint. Ampney Crucis and his manservant are knowingly in an alternate 1930s Britain where the Great War did not happen.  His life was ruined during the war and now they are getting used to their alternate's way of life in this new world where Ampney is some kind of government investigator.  The story starts and ends with a really weird prehistoric sea monster/train accident which is the case he is given to work on.  This is going to be good!! 5/5

Ack-Ack Macaque: Indestructible - Very short.  An intro to a novel that was published in Jan. 2013 of the same name by Gareth Powell set in 1941 WWII Britain about a man-made fighting monkey machine.  Too short to be of much interest and I'm not interested in this type of novel.  3/5

The Red Seas: Fire Across the Deep, Part 1 - I was pleased to see another series by Ian Edginton!  Fabulous start!  This series has been done before as there is a note to refer back to prog 13-something.  However, this is a fresh story, at least it appeared to me and was great.  1770s, south seas but in an alternate earth.  The crew of a ship are on their way to fight the Devil and he knows they are coming.  As an introduction to their journey, they fight a kraken in this episode.  5/5

Aquila: Quo Vadis, Domine? - "Where are you going, Lord?" First time I've read Aquila.  I liked it but not sure of the point?  The Apostle Peter is fleeing Rome and meets Aquila who fights off some weird demons.  Peter talks of how he denied Jesus and how he must flee to spread the word as he was commanded.  Acquila speaks to him in a way that gets him to question his faith so that he determines to head back to Rome.  He realises that he must make a sacrifice for the Lord.  This is after he has a vision of the Passion of the Lord.  Kind of like a bible lesson with demons.  3/5

The Visible Man: Scars - Cool!  My first intro to the visible man who has no skin and has certain powers he got from space.  He's being held prisoner by the dr. who is experimenting on him and there is a visible woman the dr. has created for him.  They escape in this episode and the authorities find an alien life form nearby.  Ends with to be continued.  4/5

Strontium Dog: The Life and Death of Johnny Alpha, Chapter Three: Mutant Spring, Part One - I have no idea who or what Strontium Dog is but this brings us Johnny Alpha who has been captured, he does something weird to Sir Pelham that makes him set Johnny free who then escapes and goes out to the mutants saying that they've all but exterminated the mutant race.  Intriguing!  I love the art.  4/5 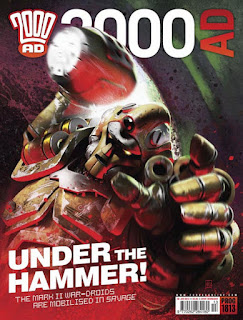 Judge Dredd: Heller's Last Stand, Part One - Judge Heller is having an assessment day by none other than Dredd himself, they were trained together.  We find out though, that a crimelord is holding Heller's secret girlfriend hostage in return that Heller makes sure Dredd gets hit this day.  Good set up.  I like stories of the "old" Judges; ones who turned out differently than Dredd. 4/5

Savage, Book 8: Rise Like Lions, Part 2 - The Mark IIs are demonstrated to Savage.  He sees their "ethical governor" in action and how it evaluates the minimum damage and most cost-effective kills.  He also gets an example of the moral sophistication of the "guilt patch" put into decision making.  Then at a dinner party things are set in motion for the Battle of London.  Savage is to return as a leader but not participate in front-line fighting.  Enjoying the story so far and what I know about the robots is making sense in this "before" scenario from what I read earlier.  Looking forward to more.  4/5

Ampney Crucis Investigates: The Entropy Tango, Part Two - Found I was looking forward to this one.  And I'm liking it!  Found that someone must have meddled with a time portal to bring the prehistoric monsters through and I've found out Ampney *wants* to get back to his own time-world.  Finding whose behind this may help him.  On his way to a dinner party with the Mauritanian Ambassador he finds he's mistaken and it's actually the Martian Ambassador who requested his company!  5/5

The Red Seas: Fire Across the Deep, Part 2 - A filler to set-up some info.  The boat is flying now with some kind of propeller.  We learn that some of the crew are immortal.  That two are brothers and the female is their cousin.  We see that time as we know it has no meaning in this place.  It is more God's time: a day = a week, a year, a century, all?  The issue ends with them arriving at some sort of entrance.  (4/5)

Strontium Dog: The Life and Death of Johnny Alpha, Chapter Three: Mutant Sprint, Part Two - Action-packed episode as Johnnie, Maxie (a mutant) and Sir Pelham (under the control of a monster thing) make their escape from the authorities who have sterilized the mutants through the water.  Love Ezquerra's art.  5/5