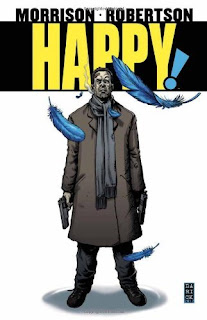 "Meet NICK SAX - a corrupt, intoxicated ex-cop turned hit-man, adrift in a stinking twilight world of casual murder, soulless sex, eczema and betrayal. With a hit gone wrong, a bullet in his side, the cops and the mob on his tail, and a monstrous child killer in a Santa suit on the loose, Nick and his world will be changed forever this Christmas.


Received an egalley from the publisher through Netgalley.

I love Grant Morrison and will pretty much read anything he writes, as long as it interests me.  And an ex-cop turned hit-man sounded like my type of dark storyline while the "tiny blue horse" hit my quirky bone.   This is vulgar and violent on one hand while sweet and syrupy on the other.  It has a happy feel-good message and ending but the excessive vulgarity counteracts that to a point where this actually works.  The plot of the crime is quite dark and twisted that it grasps the reader.  But then we have the Jiminy Cricket figure of Happy, the tiny blue horse with wings, flying around with enthusiasm: "you can do it!, pick yourself up! try again! only you can save her!" while Nick, the detective, and the rest of the characters speak in word bubbles that seem to contain at least 2 f-bombs per bubble that the two extremes actually cancel each other out and I can't believe it ... but it works!  Not Morrison's best work by any means, and at 96 pages short and somewhat rushed but no denying this was a fun read for me.
Labels: 2013 4* crime humour image comics