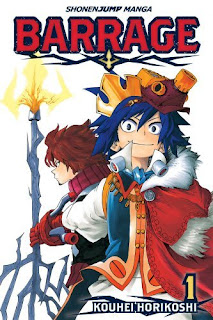 "Fresh from the pages of Shonen Jump in Japan comes an action-packed reimagining of The Prince and the Pauper!

Spunky slum kid Astro gets the chance of a lifetime to end the chaos ripping apart his home planet when the playboy prince switches places with him. Now Astro has become Prince Barrage, a boy charged with the duty of restoring peace to the planet…and given an all-powerful magical spear to do it!

In order to save the planet, Astro will have to battle terrifying aliens while learning how to fight from his even more frightening guardian, the exacting knight Tiamat. Does a kid like Astro have what it takes to become the real prince and save the planet?"


Received a review copy from Simon and Schuster Canada.

Wonderful!  Loved this.  So fun going into a manga knowing that it is only 2-volumes long for a change.  I love Twain's Prince and the Pauper and that is what drew me to this story but it only has the very basic similarity in that the streetkid becomes the Prince.  I won't say anything more about the plot since it's just two books!  Astro, the main character is a lot of fun with lots of moral fibre teaching the other Royals something they've forgotten for some time.  His bickering partner is also fun a little mysterious.  The battles are great and the "boss" at the end of this volume is very cool.  The T rating for 13+ states violence but there is nothing graphic at all and I would have recommended for younger readers (8+) if not for the cursing, though there isn't much.