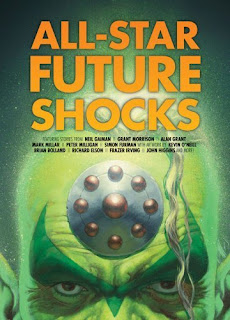 
"A collection of astounding and entertaining short comics stories from some of the biggest names in comics, inclusing, Neil Gaiman, Grant Morrison, Peter Milligan Mark Millar and many more.
‘Where legends are born!’
Future Shocks – these self-contained short stories from the pages of 2000 AD have been the testing ground for many of comics greatest writers and artists. From the far reaches of the galaxy to the lowest depths of hell, discover what lurks within the fevered imaginations of such luminaries as Neil Gaiman, Grant Morrison, Kevin O’Neill, Brian Bolland, Alan Grant, Peter Milligan, John Higgins, Alan Davis and Mark Millar to name but a few." Simon & Schuster Canada


It's not too often that I don't finish a graphic novel, as realistically how much effort does it take to finish one even if you are not enjoying it that much.  But this is the second anthology collection of shorts from the pages of the comic "2000 AD" I've attempted to read.  The first one I did finish but wasn't that impressed with.  This time I just had no connection with any of the stories and stopped after 14 of 48, though I did skip ahead and read the one by Neil Gaiman for a total of 15 stories.  None of them impressed me, at anywhere from 1 to 3/4 pages long they were far too short and random and just not "shocking" enough to find enjoyable.  I don't think I'll bother with these so-called "Tharg" collections anymore.