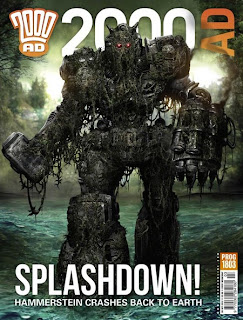 Judge Dredd: Bullett to King Four - A one-off story but also the beginning of something bigger to come.  Politics are in the works for a large mission and Dredd has a run-in with an old enemy (4/5)

ABC Warriors: Return to Earth - Hammerstein lands on Earth and joins a crew of ABC Warriors who are being sent for reprogramming.  H. tries to tell them it will be the death of them but they don't believe him.  I'm still not really into this story. (3/5)

Brass Sun: The Wheel of Worlds, Part 4 - Wren is wounded as we left her, she drags herself far enough to try to open the hidden gate and enters a strange building.  Very short but intriguing.  Still loving the art.  (4/5)

Grey Area: This Island Earth, Part 4: Janzen comes up with a way to get around Uuveth's diplomatic immunity and while they are in the act of arresting him,  Uuveth spills his race's disregard for Earth.  Cliffhanger ending as the arrest starts to go down.  I'm really enjoying this serial and love the art! (5/5) 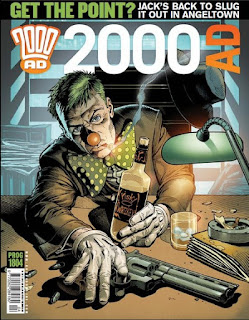 Judge Dredd: Asleep, Part 1: A very promising start to a new storyline, quite violent with an intriguing "tada!" ending as someone we meet turns out to be waaay more than he seems (5/5)

Brass Sun: The Wheel of Worlds, Part 5: Wren wakes up in a hospital and finds out she is inside the clockworks.  She meets the people who live &amp; work here and meets a very strange robot/human being who tells her that her grandfather was on the right track all along and he offers to fill her in on the rest.  I wish these sections were longer!  They are like little teasers.  (5/5)

ABC Warriors: Return to Earth: Hammerstein has just about convinced the other ABCs that they are about to be annihilated when the human soldiers tell them to hurry up.  When H. tells that he has told the others the truth they waste no time turning the weapons on the robots.  Big action scene, then H. and the survivors take off with H. on his way to Washington.  This one I actually enjoyed! (4/5)

Grey Area: This Island Earth, Part 5:  The end of this series has a showdown and some deaths.  The story arc finishes on a grim note but the series itself is left wide-open for further tales.  I enjoyed this and the fabulous art so hope more will come!  (4/5)

The Simping Detective: Joker to the Right, Part 1: Tharg's editorial at the beginning of the comic tells us this is this comic's first appearance in 2000AD with it usually being seen in Megazine.  I was looking forward to it as it is set in Dredd's Megacity but Judge Point the main character is part of Wally Squad.  This is the dirty, lowdown, crime-ridden part of the city.  This was a hardcore, violent, noir detective tale with extremely weird characters.  Loved it!  The b/w art is just a tad too heavy handed with the negative space filled of black ink but otherwise I like it.  An interesting start to the case!  (5/5) 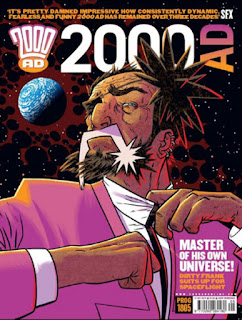 Judge Dredd: Asleep, Part 2: The bad guy, Erik, tries to take out the Chief Judge.  We find out why he's a bad guy and at this point I sympathize with him as being a victim of circumstances.  We've gotten to know his character as to who he has been for these last many years and he was likable.  Will he still be after this though?  The law knows who he is, really, and is after him. (5/5)

Brass Sun: The Wheel Without Worlds, Part 6: The weird big guy tells Wren the history of their clockwork universe from the beginning of time to now.  Of course, mankind is responsible for his own fall and the state of things as they are now.  He figures Wren is the one who can help him get things back to a better state and  suggests a mission for her.  If this is published in a trade, I will so be there!, the art is scrumptious (I.N.J. Culbard). (5/5)

ABC Warriors: Return to Earth: The story has picked up the last two issues and I'm getting a feel for these current characters in play.  Hammerstein has been left behind at the War Memorial, immobilized, meaning he can see but can't speak or move and has been painted white like a statue.  The plan is that Dedan is going to reactivate him in the evening.  However, the FBI arrives as they've figured he is a Mars class robot and shouldn't be there.  They use all sorts of weapons on him trying to destroy him, but calling on the Dark Force H. is able to reawaken and ...  (4/5)

Low Life: Saudade, Part 1:  I've been looking forward to this!  Rob Williams writes weird stuff and D'israeli is a great artist.  I haven't read any "Low Life" stories yet so this is my first introduction and Dirty Frank (Judge Frank) appears to be a crazy weirdo.  He wakes up to find himself on the moon apparently a very rich investor in Overdrive, Inc.  Everyone seems to know what is going on except him, but he takes it all in his stride.  Ends on an interesting note.  (4/5)

The Simping Detective: Jokers to the Right, Part 2:  Loving this!  Colour has been added to the mainly b/w art with splashes here and there or bits like a girl's hair, very effective!  Last story Judge Point was given a doll (to guard?).  Now he's being contacted by his corrupt boss who knows he has the doll and wants it, he's threatened Point's girlfriend for a swap.  Point agrees and then everything hits the fan.  When the dust has settled Point thinks maybe he has been set up. This is very gritty and noir but weird.  Love it!  (5/5)
Labels: 2000AD 2012 anthology comic book science fiction short stories