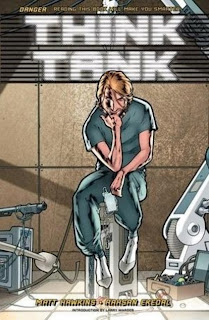 
"Dr. David Loren is many things: child prodigy, inventor, genius, slacker... mass murderer. When a military think tank's smartest scientist decides he can no longer stomach creating weapons of destruction, will he be able to think his way out of his dilemma or find himself subject to the machinations of smaller men?
Collecting the original series in its entirety, this trade paperback also is jam packed with a complete cover gallery, bonus articles, behind-the-scenes sketches, and more!
Collects THINK TANK 1-4"


Fantastic.  A science-based spy/action story.  Inside secret military government weapons and the scientists who make them.  This is a brilliant edge-of-your-seat thriller with its fair share of action but most of it is cerebral as David matches wits with the other scientists and the military hierarchy. I guessed the reveal at the end quite early on but was gleeful to have the story go the way I thought it would rather than disappointed to have figured it out.  Absolutely love David as a character and could absolutely *see* this graphic novel happening in my head as I read it.  The artwork is good and done in b/w, which I am a big fan of when used with the right project; it fits here perfectly.