21. The Curse of Dracula by Marv Wolfman 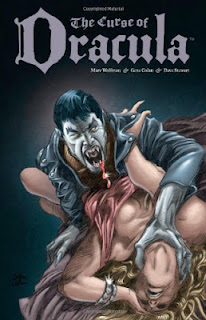 The Curse of Dracula by Marv Wolfman. Art by Gene Colan (US) - (Canada)
Tomb of Dracula, sequel

First sentences: "They're playing with him, actually, flying just slow enough he can stay ahead, yet fast enough he can't escape."

The Curse of Dracula is back in this deluxe new hardcover edition! A mysterious, charismatic figure is moving amongst the circles of San Francisco's political elite. When Jonathan Van Helsing and his team of vampire hunters come to town investigating a string of grisly murders, they know it's only a matter of time before they come face to face with the master of the dark!

Reason for Reading:  Dark Horse is one of my favourite publishers, especially when it comes to horror and sci-fi, plus I love a good vampire story.

I quite enjoyed this book.  I've heard of the 70s "Tomb of Dracula" but never read it.  This is a sequel to that series written and illustrated by the same team in 2005 with this being a new "deluxe" re-print since the illustrator has recently passed away.  The story was good but never seemed to really hit its potential.  I think this is because it is so short, only a 3-issue mini-series that really hit its stride in the second issue but wrapped up way too quickly in the last issue, not giving the reader enough time to mourn the loss of a major character, deal with the sudden twist and the hanging "there's more to come" ending that we know never came to fruition.  Still a decent enough story, worth the read if you are into this type of thing.  The art on the other hand is excellent!  I was mesmerized from the beginning and enjoyed every single page.  First of all I was happy with the unusual layout of the pages, no grid-like panels here.  Very quirky off-set panel designs for every page made them visually delightful, the art is wonderful to behold and some of the imagery is simply disturbing to view.  This one is iffy for an age range but rather than say 18+, I'm confident with 16+ as though there is language, sex and nudity; the language is minimal, there are only a couple of sex scenes and they don't show anything, and the nudity involves a few breasts, nothing you wouldn't see in a PG-13 movie but the violence and imagery does put it up there between 16/18.  Having read this I am very interested in reading the "Tomb of Dracula" omnibus now.  Unfortunately the huge Essential editions are out of print and I'll have to go with the smaller colour omnibus but I've added Vol. 1 to my collection already!
Labels: 2005 2013 3.5* dark horse graphic novel horror vampires