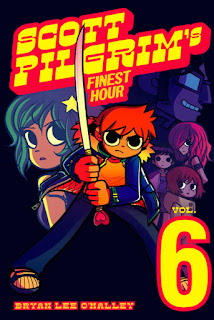 ``It's finally here! Six years and almost one-thousand pages have all led to this epic finale! With six of Ramona's seven evil exes dispatched, it should be time for Scott Pilgrim to face Gideon Graves, the biggest and baddest of her former beaus. But didn't Ramona take off at the end of Book 5? Shouldn't that let Scott off the hook? Maybe it should, maybe it shouldn't, but one thing is for certain—all of this has been building to Scott Pilgrim's Finest Hour!``

Probably the best book in the entire series; this one made my back & forth like/hate relationship with the other volumes worth the journey to come to this conclusion.  In conclusion, I think the story ends up not really being about Scott at all but more about Ramona, and the other female characters, as they learn they don't need a guy to make themselves happy (complete). I didn't get mad at anybody this time :-); I'm happy with how the story ended and glad that it wasn't just all about Scott defeating the ex-boyfriends, which is where it seemed to be headed so many times throughout the series.  My overall average for the series as a whole works out to 3.5/5 which feels about right. I'm not crazy about it, but did enjoy the humour and liked the pop culture references.  While I don't appreciate, I can certainly understand its cult appeal.

As a side note, I made dh watch the movie with me the weekend after I`d finished the series thinking it would be his type of movie.  Anyway I had to keep nudging him as he kept dozing off but then all of a sudden *I* woke up and found we were at the 59 min mark so I woke him up again and told him we`d turn off the movie.  We watched TV instead!  Thank God my Scott Pilgrim adventure is over.  I don`t recommend it to over 40s.
Labels: 2007 4* canadian author fantasy manga oni press romance video games