57. The Spider: Terror of the Zombie Queen by David Liss.

The Spider: Terror of the Zombie Queen by David Liss. Art by Colton Worley (5/5)
The Spider: Vol. 1 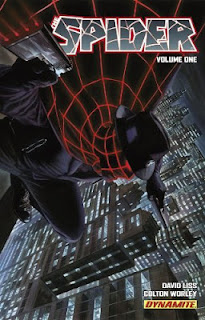 "The Spider, one of the most celebrated pulp heroes of all time is back, and re-launched into the 21st century! Richard Wentworth is a decorated war hero who has sacrificed everything, including the woman he loves, for duty. But the New York City Wentworth returns to is riddled with crime and corruption. With the police overwhelmed and a populace helpless, Wentworth becomes The Spider, a vigilante as ruthless and merciless as the criminals he hunts. But now there's a new danger on the rise. A deranged woman called Anput has begun a series of attacks that turn ordinary citizens into mindless zombies, bringing New York and the police force to its knees. Wentworth will stop at nothing to save the city he's sworn to protect, but in the process he will risk his family, his friends, and the woman he still loves."


A modern re-imagining of the 1930s/40s pulp novels of "The Spider"; a pre-cursor to comic book superheroes who fought larger than life villains.  This is set in modern New York and yet there is an aura that leads one to feel the timelessness; there are blimps in the sky, the men wear hats, etc.  I was fascinated with this tale and enjoyed every moment of it.  Spider doesn't really have any superpowers but he does have technology which allows him to grapple his way around tall buildings, almost flying, such as the later created "Spider-Man".  He has infra-red vision and use of laser guns all thanks to his scientist friend.  A dark, gritty noir crime story with amazing art.  The people look almost life-like and I found myself lingering on certain pages just to enjoy the art.  I have to say this but Richard Wentworth, the Spider's alter-ego, is one attractive dude! and he reminded me very much of David Boreanaz.

Usually these trades contain a complete story arc but I like how this one has been compiled.  Containing the first six issues, Issues 1-5 are a self-contained story with the villain Anput.  Issue 6 starts us off with a new story line that just gets us interested and intrigued by the time the books end.  I found this to be a bit above anything I've read lately.  This is one series I'd love to continue reading.
Labels: 2012 5* based on a book crime dynamite entertainment noir superheroes