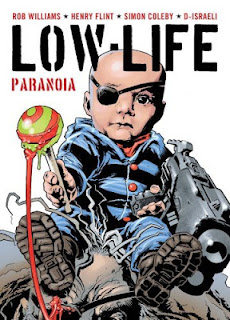 
"It takes a special kind of Judge to go undercover on the mean streets of Mega-City One, especially in the crime-infested Low Life; the nastiest part of the Big Meg. These Judges are brave, rebellious and completely unhinged! Judge Aimee Nixon has operated the Low Life for over eleven years, infiltrating ground level crime with fellow ‘Wally squad’ Judges, Thora the oldster, ‘baby Judge’ Eric Coil and the aptly-named Dirty Frank." Simon & Schuster Canada

Mention of the "Wally Squad" in the Low Life in MegaCity 1 has popped up briefly in my Judge Dredd reading here and there and I've been very intrigued in reading these tales of the Judges of the slums.  So I bought this book a while ago and now that a new "Low Life" story has started in the 2000 AD comic I decided to catch up on the background.  I loved these stories.  Rob Williams writes some pretty weird tales and he didn't disappoint here.  The first half of the book is illustrated by Flint and I enjoyed it the most, while Coleby's illustrations in the second half took some getting use to afterwards since their styles are complete opposites.  The stories are great though; dark and gritty, with the second half becoming more humorous.  Either Judge Aimee Nixon or (Judge) Dirty Frank are the "star" of these tales and while Dirty Frank is quite the character I have to say I'm really impressed with Nixon, a real tough, hard-core female character with an intense background to match.  I "think" (from Rob's intro) this collects all the stories to date, from 2004-2007.