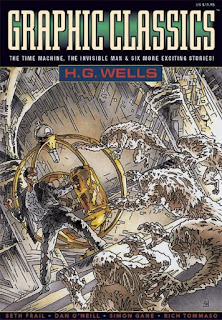 "• The Time Machine -The ultimate fate of mankind, illustrated by Seth Frail
• The Invisible Man -An all-new adaptation by Simon Gane
• The Inexperienced Ghost -A confrontation with a spiritual neophyte by Rich Tommaso
• The Man Who Could Work Miracles -A fable adapted by ex-Air Pirate Dan O'Neill
• The Man With a Nose -A meeting with a social outcast by Skip Williamson
• The Temptation of Harringay -A Faustian tale illustrated by Milton Knight
• Le Mari Terrible -Tea and sexual intrigue, newly-illustrated by Lisa K. Weber
• The Star -An apocalyptic fable adapted by Brad Teare
• The War of the Worlds -A retelling in comics of Orson Welles' radio broadcast of“The War of the Worlds” by Antonella Caputo & Nick Miller
• Plus illustrations by Chris Moore, Rick Geary, Jim Nelson,and Kent Steine, with a cover by Seth Frail"

I'm a great fan of H.G. Wells having read a huge old tome entitled the "Complete Novels and Short Stories of ..." when I was a young teen.  I've re-read various titles over the years but it's been some time since I read any of the novels so this was great fun to revisit two of them.  This anthology starts and ends with nice long adaptations of novels, "The Invisible Man" and "The Time Machine" respectively.  Both are very well done and since they are relatively short novels to begin with are perfect for graphic adaptation.  A unique feature in the middle of the book was a representation of Orson Welles' radio broadcast of "War of the Worlds".  This was an entertaining look at both H.G.'s story and a strange piece of history that makes me want to actually hear that broadcast for myself.  The rest of the book is filled with several not so well known short stories that show another side of Wells' writing featuring the ghost and paranormal.  I loved most of the art and as usual the artist matches the style of the story.  My favourite of the lot was the two novels and my favourite of the short stories was "The Inexperienced Ghost" with lovely era-appropriate illustrations by Rich Tommaso.  This is one of my favourites in the Graphic Classics series.  This edition, unfortunately, is currently out of print, but according to the publisher's website a third edition is in the works for publication in Feb, 2014.
Labels: 2005 5* anthology classics eureka productions science fiction short stories