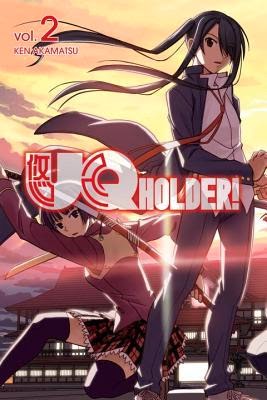 UQ Holder 2 by Ken Akamatsu
My rating: 4 of 5 stars

This is getting a lot more tense and dark. Tota and Kuromaru are taken to UQ Holder Headquarters where they are thrust into a deadly challenge, a test to see if they are worthy enough to become members of the esteemed UQ. While we know Tota is a vampire, we find out the world he belongs to is filled with the yokai and Kuromaru's secret is finally revealed (which makes the OT rating for this series appropriate for 16+). There is plenty of battle with just a bit of magic and it is much more mature in presentation than other shounen. They have been sent out on their first mission which proved to be violent and we don't know whether successful yet or not. The main character Tota adds the light-heartedness to the series, even though he is proving to be much more powerful than he thought, his attitude is laissez faire and remarks flippant. On the other-hand we are getting to know much more about the serious characters of his partners Kuromaru and Karin. This follows a lot of the common shounen tropes but much more serious and mature which is reflected in the 16+ age rating. I like this!