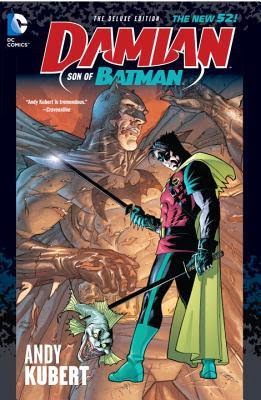 Damian: Son of Batman by Andy Kubert
My rating: 4 of 5 stars


This is a little strange because we are transported to the future. A future where Bruce Wayne is a sick elderly man, Dick Grayson is Batman and Damian Wayne (alive and well) is still Robin. The book opens with the death of Batman and Damian coming to terms with himself taking over the reigns as the new Batman, at first he refuses to carry on the tradition of being just and drawing the line at killing but he finds everyone from all sides coming down hard on him after his string of eliminating the bad guys. He promises his father to carry on the tradition and live up to the respected role of a just Batman. This is a dark, gritty Batman with quite a few changes in this possible future which I won't mention. Alfred's situation becomes quite strange though, I will say. Not really sure what is up with that. I didn't like Damian when I first read him as a character, but the more he's developed the more I like him and Morrison does write him well. I really enjoyed the story and the art, finding it a gripping, serious read. There is a priest who shows up quite a lot who is a mysterious character who knows the Waynes but is never identified. Will this story arc continue? I want to know who he is. Damian's Batman costume is a bit weird, mostly it is the familiar costume but instead of a cape he wears a long trench coat with the utility belt, as the belt of course, and the coat's tails flow off into cape features. So it appears cape-like when he's jumping/flying around but it is definitely a coat, not a cape. I didn't find it aesthetically pleasing. But a serious take on the Batman mythos, and an intriguing look at a future scenario. Good reading.