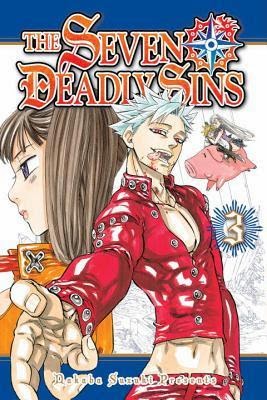 The Seven Deadly Sins 3 by Nakaba Suzuki
My rating: 4 of 5 stars

Continues along in the same vein and is settling down into being a "quest" fantasy. A new deadly sin joins the team at the beginning and we get to know the most about him and other new characters this volume, with little development on the others. Some funny stuff at the beginning with intermittent battles. Another new character comes along who seems to be a friend of the sins' except he's out to kill the new guy, Ban! This takes up the action until the final chapters when a new Holy Knight arrives to finish off the Sins. She is very powerful and the book ends mid-battle. This is one of those "fun" volumes where things go along nicely. The fantasy quest angle makes a good change of pace from the plentiful battle-action mangas for this age range. And except for those few scenes in Vol. 1 I'm quite comfortable with the age appropriateness of this series and have let my (just turned) 14yo read them. He gives the series a thumbs up.