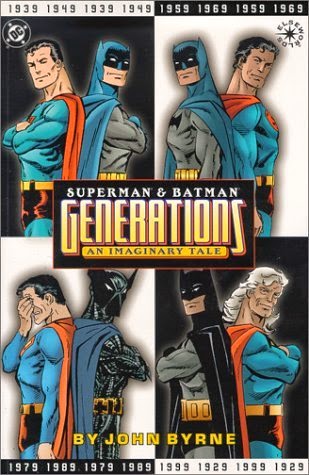 Superman & Batman: Generations, An Imaginary Tale by John Byrne
My rating: 5 of 5 stars

I wasn't too sure what to expect from this. I really do like my books to be part of the official chronology but don't mind a bit of fun outside that, though at first glance I thought this might be cheesey. Boy, did I have the wrong idea there! Quite impressed actually. This takes Batman and Superman as they meet over the years from 1929 to 2919, though the main time frame is set every ten years from 1939 to 1999. This is set within an "Elseworlds" where time passes normally for our heroes and they age, get married, have children, grandchildren, etc. I especially enjoyed the 30s and 40s stories which were fantastically written and illustrated true to genuine comics from that time period but with more emphasis on character and a continuing plot. As time passes each story's art style reflects that era's. As I said I was quite impressed with the story and was not expecting such an emotional, well-written plot. This centres on Bruce and Clark's characters along with their alter ego's giving us a rare glimpse inside these two that isn't just heavily filled with brooding but with a real empathy full of pathos and joy. We meet up with the descendents of these two superheroes, some of which have dropped out of canon, such as Commissioner Gordon's son "Anthony Gordon", Superman's son "Joel Kent" and Batman's son "Bruce Wayne, Jr.". Plus we get guest appearances by Ultra-Humanite, Brainiac, Joker, Lex Luthor, Supergirl, various Robins, Nightwing and others. But the story always focuses on Batman & Superman and that is what holds this all together, what makes it work and frankly this is especially good for an "imaginary tale".