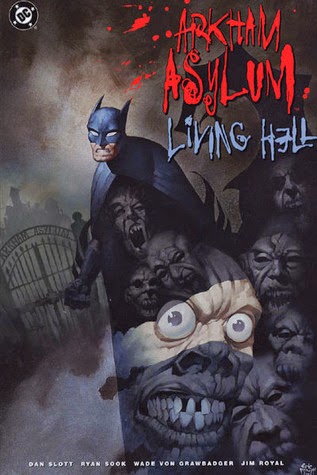 There is always time for a Batman villain showcase and "Living Hell" was literally a riot. I had such a great time with this gallery of "bad guys" that I couldn't put it down. The story isn't exactly heavy duty and there are a few arcs running through at the same time but it's all in the name of a grand romp and pretty crazy creepy at the same time. Most of the famous villains make little cameo appearances but the focus is more on not-so-well known villains or ones created just for this volume. I really liked these lesser known dudes such as Jason Blood and the demon Etrigan (why are they not in Justice League Dark?), Humpty Dumpty (his whole back story is told) and the Great White Shark (this book's main arc is Warren White's tale of how he became the villain). Batman shows up a couple of times and Batgirl a little bit more often, with Harvey Bullock getting some good page time as well. There are more powerful, deep reads out there but this is just some plain villainary (so not a word!) fun. I really liked it. The art is good too, though it's old style and been a while since I've read anything with that newsprint-ish look but it brings back the good old days after awhile. Fun!