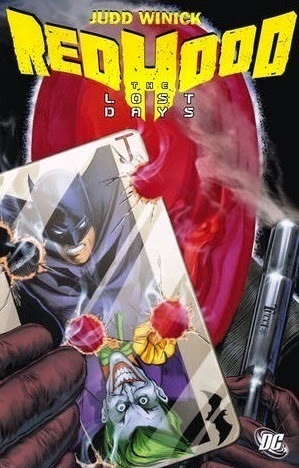 Red Hood - The Lost Days by Judd Winick
My rating: 4 of 5 stars

A great backstory volume that follows Jason Todd from his being found roaming the streets in a shirt and tie to his donning the Red Hood mask and his ideal to be a better protector than Batman by crossing the line Batman himself will not morally allow. This is a wonderful story and really gave me a lot of insight into a character I'm only just now discovering. His initial hate and rage is aimed at Batman when he finds out the Dark Knight releases the Joker instead of killing him to avenge Todd's murder. The shift in his character and the placement of his anger is fascinating to watch as he trains with specialists the world over, with Talia al Ghul's financing, in sniper shooting, assassination, bomb-making, etc. Red Hood is a fascinating character as he takes what he learned from Batman as a vigilante, yet takes things further as an anti-hero by becoming his own authority on whose life is worthless and killing as many evil criminals as he deems fit. The art is great, Jason never wears a costume but by the end of the book he gets his new Red Hood mask and it is pretty cool, very similar to The New 52 one.