337. The Ten-Seconders: The American Dream by Rob Williams 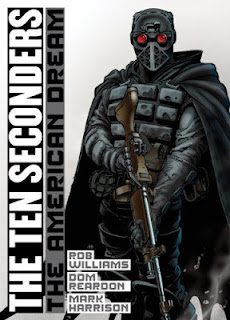 Publisher's Summary: "Earth, the near future. Humanity has been all but destroyed by a race of super-powered beings, who initially offered to help mankind, but really intended to rule them. Those that fought back against the tyranny of the ‘Gods’ were nicknamed the Ten-Seconders – their name based on the average life expectancy of those brave enough to battle to face of against such powerful opposition. This is their story of resistance."

Reason for Reading: I love this type of post-apocalyptic vigilante/war graphic novel.  I am a huge fan of the publisher and I fell in love with the dude on the cover.  Isn't he awesome?!

Rob Williams writes some weird stuff!  And this is a doozy of a story involving "gods" (aliens) who have invaded earth and taken it over, virtually annihilating the population.  Small rogue groups still fight on but their numbers diminish constantly as their life expectancy against a "god" is 10 seconds.    I did a little research on the story before I began reading so I knew what I was getting into and discovered this was indeed the complete series, divided into two series runs in 2006 &amp; 2008.  The first story "The American Dream" sees a group of British survivors heading to America following instructions given to them by "The Scientist" a strange being (perhaps a rogue "god") who is helping them in their fight to destroy the enemy.  An extremely engaging story, very brutal, no holds barred.  The character development is good; we find out backstory and characteristics of the main party members.  Don't get attached to anyone though as Williams considers no character too essential that they can't get killed off within the blink of an eye!  Very intriguing, the art is dark and well-done.

What keeps me from giving this book a full 5 stars is that the second story "Make Believe" has a different illustrator and the two styles could not be more different.  Yes, it is still dark and I enjoyed it aesthetically but the characters were so completely different as to be unrecognizable.  I had to read carefully and hope that character names would be used, just to know who was who and this caused me some confusion regarding the storyline.  While the writing was good and well plotted, not knowing who I was looking at did spoil the usual joy of reading a series like this back-to-back.  The final story is every bit as dark, if not darker, than the first and ends grimly.  The ending has a finality to it but is open-ended leaving the possibility of continuing the story.  Since this was last written in 2008, I feel we can safely presume it will not carry on at this point.  A fast-paced hardcore science fiction story with a great deal of one-liner humour to offset the darkness.  Good read!