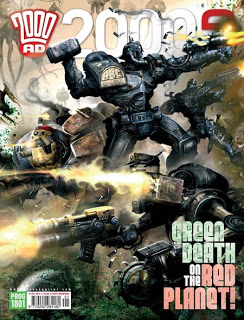 Reason for Reading: Next issue.

Judge Dredd: Payback - We are introduced to the new Mega-City One universe which has undergone another apocalypse leaving it devastated and in ruins.  Can't wait to read that backstory!  Dredd stops some scavengers, we see cadets are in the field because there are not enough judges and an old injured judge (Dolman) is working out to come back on duty, in some capacity.  The military comes in looking for Dredd to tell him he's wanted at a meeting.  Dredd's not interested in discussing the past but the military is interested in payback!  Obviously the start of a series.  Good story but I'm not crazy for P.J. Holden's art. 4/5

Brass Sun: The Wheel of Worlds Pt. 2 by Ian Edington - Love, love love the great art by I.N.J. Culbard.  Wren reads her uncle's note and learns she is on her own and has a purpose.  Back where her uncle has been imprisoned we see that the religious in charge are not really about the religion but about the power and their own selves being worshipped.  Wren is threatened.  5/5

The ABC Warriors: Return to Earth - Still not getting the gist of this comic.  More back story talk about what went wrong the first time they were on Mars, why they all went their separate ways.  Then Hammerstein is asked why he went back to Earth and ended up in Ro-Busters.  He responds that he's never told anyone before the painful story of how he "betrayed robotkind".  If I knew who these guys were it would be more entertaining but the art by Clint Langley is divine.  It's like what you get on a video game, very futuristic, very mech. 3/5

Terror Tales: Blackspot - Creepy story where a bickering couple in a car late at night run into something that looks like a child.  Using the typical lure and attack of roadway criminals this takes a paranormal twist and ends in the "twilight zone". Fun! 4/5

Grey Area: This Island Earth Pt. 2- Bulliet and Birdy go to the diplomat's residence to investigate.  But they take the staff entrance and talk to the driver trying to get information from him about the car seen at the murder site.  Starting off friendly they turn antagonistic,  the driver starts off antagonistic and ends off trying to warn them away.  The final scene shows us the alien diplomat, Ambassador Uuveth asking the officers if he might be of service.  Good art. Good story.  Hook ending.  Am enjoying these characters and the not so distant (2045) future it is set in.  5/5
Labels: 2000AD 2012 4* comic book science fiction YA