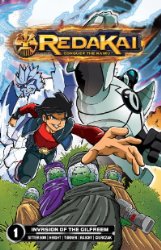 
First sentence: "If you really think you can beat me ... you've gotta be crazy!"

Publisher's Summary: "Ky, Maya and Boomer investigate a mysterious source of kairu and land smack in the middle of an alien invasion! But not everything is always as it seems. Is it really all up to Team Stax to save Earth from the Gilfreem? Plus, a bonus story, “Home, Kairu, Home.” There’s trouble on Boomer’s family farm. Is a rival team stealing animals to extract kairu energy?!"

Reason for Reading:  I haven't seen this cartoon (or heard of it actually) but the book seemed similar in presentation to the current "Voltron Force" series by the same publisher which I recommend and I wanted to see how this compared.

Going into this book not knowing anything about the plot or characters they managed to do a very good job setting up the basic premise for the new reader over a two page spread.  This included pictures of the main characters (and there are many) with brief blurbs about them and a small paragraph that tells "The Story So Far".  From this information and the basic knowledge of your typical Pokemon, yu-Gi-Oh!, and other battle monster cartoons one can easily pick up the plot.  Combining elements from several of these popular shows along with the Power Ranger-type giant monsters we have a general premise that manages to be similar to what we are used to yet unique in it's own quirky ways.

The story was very interesting and a good opening one which puts the main heroes onto a mission right away that involves aliens from another planet who at first seem evil but end up needing Team Stax's help.  Plenty of battle scenes, funny quips and enough situations that put the three main heroes to work showing off their individual character, good and bad.  Following the main story is a short "Bonus story" which takes Team Stax to Boomer's home planet where they help out his parents whose farm has been attacked mysteriously in the night.  A more comic episode than the main story.  A good opening volume that makes me want to continue on with the next volume.  At this point though, I see "Voltron Force" as being the more in-depth of the two.
Labels: 2012 3* children manga science fiction viz media