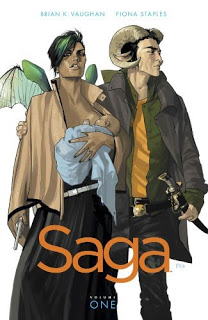 First sentence: "This is how an idea becomes real."

Publisher's Summary:  "From New York Times bestselling writer BRIAN K.VAUGHAN (Y: THE LAST MAN, EX MACHINA) and critically acclaimed artist FIONA STAPLES (MYSTERY SOCIETY, NORTH 40), SAGA is the sweeping tale of one young family fighting to find their place in the worlds. When two soldiers from opposite sides of a never-ending galactic war fall in love, they risk everything to bring a fragile new life into a dangerous old universe. Fantasy and science fiction are wed like never before in a sexy, subversive drama for adults. This specially priced volume collects the first arc of the smash hit series The Onion A.V. Club calls "the emotional epic Hollywood wishes it could make."
Collects SAGA #1-6"


Acquired:  Received an egalley through Netgalley

Reason for Reading:  I'm finding myself more pulled towards sci-fi than fantasy in my graphic novel reading and this sounded both fresh and involved.

Love, love, love this book.  An incredible story.  One that is intricate, involves many levels, plots, characters and yet it all centres around the two main characters, an interspecies couple who has wed and born a child together.  Their species have been at war with each other for what may as well have been forever and yet these two are unique examples of "people" not defined by species alone.  Taking the race card one step further into species we see the same old bigotry being played out on a grander scheme as one species believes it is of an higher order than an other.  What I particularly love at this point is how incredibly life affirming the context is.  Having children is not exactly something encourage in this society, especially girls, but this couple affirms their love by having a child and later on in the book another (different species) couple find out they are pregnant and the issue is brought up whether the husband is happy, and won't mind even if it is a girl.  He responds positively.  The sex trade involving children is examined and the most unlikely of characters becomes a little girl's rescuer and advocate.  I love the two main characters, they are both upright people and yet their personalities and morals are different, sometimes clashing.

For warning, the book does include coarse language, not every page but frequent enough.  I found it acceptable for the characters using it.  There is full frontal nudity of both sexes, even though they aren't all "human", yet I was pleased that these scenes were at least between married couples.

The art is stupendous.  This is my first introduction to Fiona Staples but I will be watching for her name in future.  Her drawings are realistic and she brings humanity to her non-human subjects as well as presenting simply stunning panels.  Her character's facial expressions are able to say so much more than words ever could.  A brilliant new series, that I am anxious to follow up with.
Labels: 2012 5* graphic novel image comics science fiction space opera