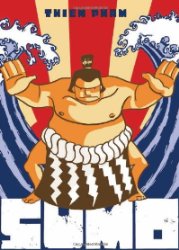 First sentence: "What am I doing here?"

Publisher's Summary: "Scott  is a washed-up football player who never made it, and whose girlfriend abandoned him along with his dreams of playing pro football. But things have a way of working out, in this sweet, poetic tale--and a new chapter in Scott's life begins as the old one ends. Offered a position in a Japanese sumo training "stable," Scott abandons his old life, his old name, and even his old hair color, and becomes an aspiring sumo wrestler. And in so doing, he begins to find some kind of center in himself...a center that had seemed lost for good."

Reason for Reading:  I read a lot of manga, and the occasional English translated Japanese novel, and am thus interested in Japanese culture.  Yet I know absolutely nothing about Sumo, except the usual misconceptions and I thought this brief volume would give me some insight to the culture of Sumo.

The book didn't really do for me what I had hope it would do.  It is not so much actually about the art of Sumo, as it is about the main character Scott, now called Hakygei.  A failed football player in a small town whose girlfriend dumps him when he's no longer being scouted.  18yo Scott decides to leave his old life behind and start anew, in a new country, with a new goal: Sumo and to create something of himself.  It is a coming-of-age tale.  Scott always found football easy and he's now finding Sumo hard, something he really has to work at.  He's thought of giving up, taking the easy way out again, but he's met a girl, who believes in him more than anyone (including himself) ever has before.  This is a slow story.  I suppose comparisons between it and Sumo could be made but I don't know anything about Sumo so can't make that connection.  And that is my only complaint with the book; I would have like to have actually learned how Sumo is played, scored, how the gracefulness despite the immense size of the participants is accounted for, it's allure, etc.
Labels: 2012 4* coming of age first second books graphic novel modern Japan realistic fiction sports sumo wrestling