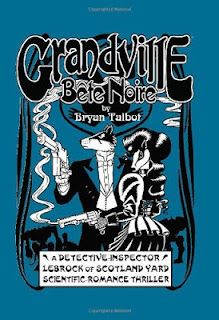 Publisher's Summary: "The baffling murder of a famed Parisian artist in his locked and guarded studio takes the tenacious Detective Inspector LeBrock of Scotland Yard and his faithful adjunct, Detective Ratzi, into the cutthroat Grandville art scene to track the mysterious assassin. As the body count mounts and events spiral out of control, the investigation points to Toad Hall, where a cabal of industrialists and fat cats plot the overthrow of the French State . . . by use of steam-driven automaton soldiers!"


Acquired: Received an egalley from the publisher through Netgalley

Reason for Reading:  I loved the whole premise of this series: animal fantasy, steampunk, crime mystery, and even though I hadn't read the previous issues, the cover art made me want to read this *now*.

What a fantastic comic.  Steeped in allusions to James Bond, Wind in the Willows and Sherlock Holmes this pastiche of anthropomorphic animals had me intrigued from the get-go.  Set in a steampunk Paris which is alluded to as "Grandville" in this alternate world where animals rule supreme and human beings are considered of a lesser evolutionary scale.  This is a world in which Britain has just recently won its Independence from a France-ruled Empire that won the Napoleonic Wars.  France itself has also just recently become a more politically socialist state and steam driven automata are the norm in this world.  A fantastic world that I absolutely enjoyed.

This particular story sees LeBrock facing off against the evil Krapau, a Bond-like villain, and wooing his lady love the nude model/prostitute, Billie.  A tantalizing story and I'll be going back to read the first two in the series.  The artwork is superb and a delight to the eyes.  Done in an overall black and white effect, though the blacks range from dark grey to blue shades.  Colour has been used to great advantage, especially with red added to the b/w scenes but some panels even employ full colour.  A truly eye-catching piece of artwork.  Loved the story and find Inspector LeBrock to be a deep, mysterious yet amusing character.

Of note, this book is not for children.  While the violence is not graphic.  It is implied and there is plenty of blood and cold-blooded murder.  The language is infrequent but doesn't hold any bars including a variety of colourful words up to and including the f-word.  Finally, sexual situations are implied and full frontal female nudity is shown, even if they have the heads of badgers.  Both the publisher and I agree on an age range of 16+.