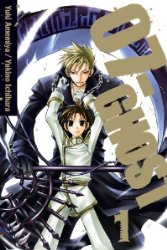 Publisher's Summary: "All Teito wants is to forget his dark past as an orphan and slave and to graduate from Barsburg’s military academy with his best friend Mikage. But when an overheard state secret triggers treasonous memories, he’s forced to flee from the very empire he once sought to defend!"

Reason for Reading: Sounded like an interesting new series for me to start.

The first books in manga series are often hard for me to review.  So much is going on, so many characters to meet and you have to figure out what is going on as you're dropped right into the situation.  I got a fairly good handle on this manga and am certainly going to continue.  I've been wanting to try a manga with a "priest" setting but, as a Catholic, wasn't too sure whether I'd be offended or not.  So far, on the whole, the religious order seems to be the "good" side and of course this is only some-sort of quasi take on religion/Christianity/Catholicism mixed up with Japanese culture and virtues.  So a fictional religion.  The main character is Tito who is seeking asylum with the nuns/priests after having a run in with a bad guy at the military academy.  His best friend Mikage accompanies him.  There are a couple of good battle scenes, short and to the point but most of this issue lets us get to know Tito, his past, learning about his power and learning about a plot against him.  Plenty of story to get into in the 2nd volume.  A good start that makes you want to continue reading.
Labels: 2012 3* manga paranormal viz media YA